Dioramas are some of the most challenging of subject matters when it come to design and format. What make this art form interesting to both viewer and artist are the details that bring together a moment in time. I learned this years ago with my first two wood creations when exhibiting in a group show at South Street Seaport in the early '90s.
The subjects that caught the attention of the general public (and news media) was a biblical diorama of Christ calming a fierce sea in the boat with his Apostles. The second was just as dramatic -the subject being whalers under the flapping flukes of a great sperm whale. That piece was titled "Judgement Call".
With the reception that was received at South Street; it was my initiation into the maritime arts.
Posted by rex-stewart.blogspot.com at 1:41 PM No comments:

Posted by rex-stewart.blogspot.com at 2:41 AM No comments:

Posted by rex-stewart.blogspot.com at 3:20 AM No comments: 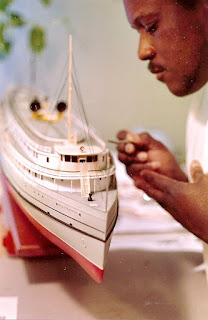 scale replica of S.S. ARROW of New England's  Colonial Line, showing her
appearance between 1936 - 1942. The ARROW first ran as the BELFAST for
for the Boston and Bangor Division of the Eastern Steamship Company.

Rex Stewart's profile plan drawing of Hudson River nightboat ONTEORA as
she appeared in 1906. At 1/8" = 1' scale, the actual length of this model was
30 7/8" inches. The plans were produced and copyrighted in 1992.

At last, there is now an amazing trend happening in the world of steamboat collecting - a resurgence of steamboat lore through the acquisitions of models that seem to grace  boardrooms, libraries and homes in the Northeast Corridor. Deemed as part of the designer's methaphor to accent rooms which capture American maritime in its heydey of the prolific sidewheeler.

Observing this recent trend has brought me to realize the possibilities to open a door for contemporary collectibles that reflect America's past in its zenith of the Industrial Age. This being the maritime and the beautiful vessels that once graced its waters.
These replicas are reminscent of the sidewheelers that commuted on the Hudson River and throughout the New England Region during the heydey of steamboating. And though my material only address certain vessels, it doesn't limit my abilities to design and reconstruct custom models from other regions, provided there is enough available data.

As a craftsman, my first priority for undertaking a project is to aim for accuracy. Meaning, how can I provide the 'best' accuracy for bringing to the collector/investor a true and concise model. 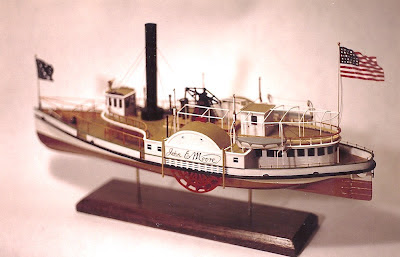 Most plans for steamboats are non-existant and no hard rules apply to authenticate those  plans/blueprints that are available. Plans were blueprints which defined a vessel, but seldom did the 19th century builder adhere to them. To assist my research I carefully scrutinize available documents such as literature, photos and paintings -information necessary for producing non-copied original drawings. Once these drawings are realized, I am then able to produce the model.

Each and every model, whether a reproduction of the first, or a custom 'original'; each has its own elegance and persona. My models are scratchbuilt at the highest standards, using the basic woods of pine and bass. The hull being of select pine and the remaining superstructure and deck details of basswood. The flags are handpainted on treated paper
to present a sense of 'movement' and 'free-flow' as if these were flapping in the wind.

I always attempt to build the models to portray a vessel as it may have appeared in that year. This, of course, is a paintstaking process but one which I enjoy pursuing. To this end I can say, with certainty, that these one-of-a-kind steamboats are truly for the collector who desires accuracy followed by quality and hands-on research.

Since coming into this unique genre in 1982, I obtained a much learned experience concerning the dynamics of Northeast steamboating in both configuratiuon and design.
The models serve as ambassadors of my artform.These are historical miniatures that represent the period and the vessel.

For more information about this line of work for a custom commission, email: Caseships@yahoo.com or call 1-774-757-7137. I would be most honored to serve your preferences.
Posted by rex-stewart.blogspot.com at 1:35 PM No comments: 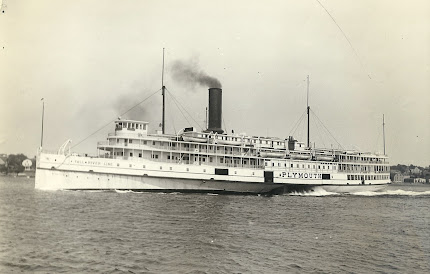 
PLYMOUTH was another beautiful sidewheeler of Fall River Line renown that I challenged myself to model. There were no plans available to work from, so I had to pour over many photos to get the configurations needed for an accurate miniature.

This was a tedious project because, unlike COMMONWEALTH, this steamer carried a unique design and mast system that required much research for accurately placing the ties in their proper locations -based on the photos.

Similiar to the other models, I kept PLYMOUTH at 1:182 scale  so that both viewer/ collector
could make distinctive comparisons to their
design and length variations. 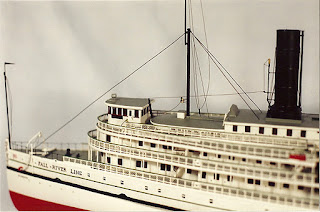 Fall River had a beautiful monopoly of vessels forwhich I give honorable kudos to those individuals that designed them. For me, as a craftsman and modelshipbuilder, I can only present these as a documented collective body in miniature. To this end history does the rest.

Here, in these supporting photos are views of PLYMOUTH as a miniature wood model. The approximate time of build was one and a half months (45 days).

The model is shown as she appeared three years before she ceased operation from the Line. Like most steamers of her day, she had a balanced career. Not as famous as PRISCILLA or COMMONWEALTH, but she was the public's favorite by way of transportation. 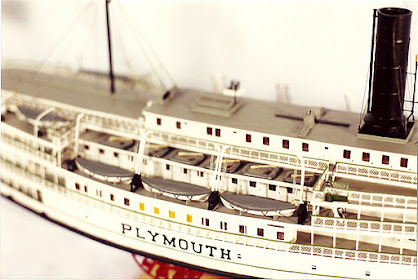 Concerning her history, PYLMOUTH was designed for winter service and did not carry a walkingbeam engine like her predecessors.

She was built in 1890 at Chester, Pennsylvania by the Delaware River Iron Shipbuilding and Engine Works Company. Her overall length was 366 feet and her beam over the guards was 87 feet. She carried a four-cylinder triple expansion engine built by W. and A. Fletcher of New York. 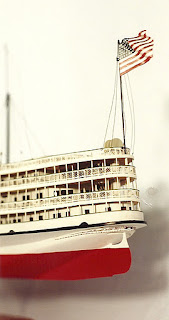 A single stack steamer, PLYMOUTH went into service November 6, 1890. Accidents were commonplace with steamboats during its heyday and PLYMOUTH's career was no exception.

She ran aground on Rose Island, Newport on June 18, 1894. On March 20th, 1903 she collided with Fall River Line's freighter CITY OF TAUNTON. And on March 27, 1906 she was destroyed by a spectacular night fire while at the Line's Repair Shops in Newport.
As officials surveyed the damages, they acknowledged that her hull was still serviceable and she was rebuilt at New York.

The 'new' PLYMOUTH had two fire resisting bulkheads and a sprinkler system throughout the vessel -years before it was law required.

The rebuilt ship was never able to maintain her original speed when first built. However, she was popular with the travelling publc
and was the favorite with many Line regulars. Her last trip was June 21, 1937. Towed to Baltimore she was scrapped the following year. 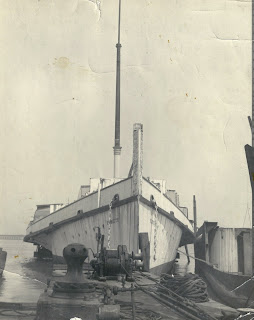 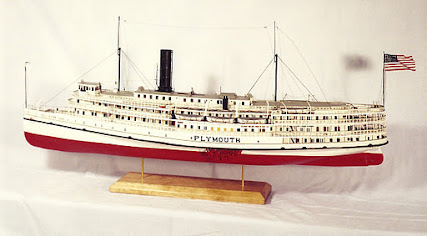 Fall River Line PLYMOUTH c.1935, 1:182 Scale -Custom Wood Model
Information concerning a custom work for any of the Fall River Line steamers can be sent to Caseships@yahoo.com or via phone 1-774-757-7137.
Thanks for viewing.

Posted by rex-stewart.blogspot.com at 2:26 AM No comments: 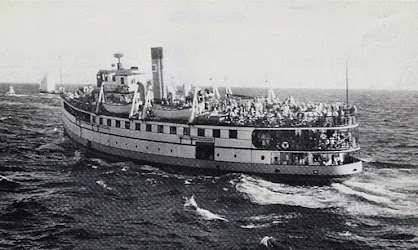 Steam transportation to and from the offshore islands of Martha's Vineyard and Nantucket via the Mainland has been an American tradition since its early beginnings in 1826.

The start of this steam phenomenon began on New York's Hudson River in 1807 -expanding east to New England and then, south and north. It was the beginning of the Industrial Age; an age of great ideas and innovation... An age of open opportunity, prosperity, and wealth for those willing to endure the vigors of competition. 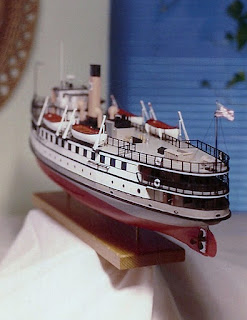 As companies grew, more and more steamboats  began to occupy the waterways of the Northeast. One such steamboat to operate in the New England Region of this area was a vessel named NOBSKA. She was a steel hulled vessel of 1082 tons, having a length of 202 feet and a beam of 36 feet. Her water depth in the hold was 13 feet and she was powered by a four-cylinder triple expansion engine.

Built in 1925 at Bath, Maine by Bath Ironworks, she went south to Massachusetts to operate for the New England Steamship Company. After serving several owners during her five decade career, she ceased operations in 1973 under the owner: Woods Hole, Martha's Vineyard and Nantucket Steamship Authority (1961-1975). In these photos, I show my build of NOBSKA as she appeared in 1967.


NOBSKA became an interesting subject to model, inpart, because of the many drawings, prints and paintings I viewed at Mystic Seaport, Nantucket and Martha's Vineyard during the '80s. From those viewings it was evident that a scale model should be made. However, it was the fond memories that her former travellers had that prompt the building.

Never seeing the actual steamship, that opportunity came in the Fall of 2004 when I was invited to lecture to a shipmodel guild in Boston. She was drydocked at the USS Constitution Museum.

After several attempts with Boston's Parks Department to get some of her wood to build exclusive models, I was refused. What better way to honor a vessel than to build models from her actual structure! I finally thought about the frutal efforts of FON (Friends of Nobska) who tried to get support to keep her preserved for dial purpose, re: a commuter steamer serving as a floating educational museum.

Times were changing and the inland/ coastal steamer was, indeed, becoming a thing of the past.

FON (Friends of Nobska) had hoped to have her restored but all efforts for this failed and she was finally scrapped. This organization attempted to acquire her years prior, in 1975, when the Revitalization Project in Baltimore's Inner Harbor was in effect.

The vessel was sold to Adam Spiegel who tried to have her serve as a floating restaurant in the harbor. But as the development progressed, there was no interest to have NOBSKA as part of the plan. So after 13 years of waiting Mr. Spiegel finally released the historic ship to the FON Membership. 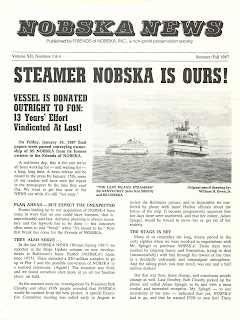 Upon release, in 1988, NOBSKA returned to Fall River, Massachusetts -the same area where she departed to go south in '75.

FON published their excitement in their Nobska News newsletter that prior winter. At that time I had joined their membership, but it was eventually short-lived.

I still went on to build beautiful models of this beloved vessel and appreciated the support from those who believed in my work to commission the models -as it is this day.

The version that I chose to model which, I believe is her most attractive presentation, is her appearance of 1967.
From a professional viewpoint her lines are sharp, and the colorscheme and black markings make her quite appealing. To that end, I found no one to challenge this.

Below are two views of NOBSKA. The model is scratchbuilt from wood and the accessories are handmade, with only the propellor manufactured from soft metal. The scale of this work is 1/8" = 1', overall length of 26 1/4" inches. 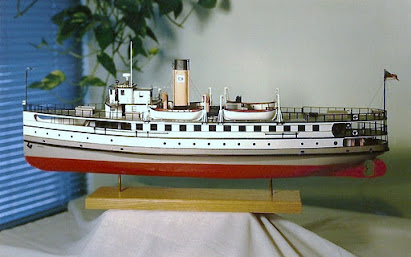 As with all my models, I work in various lengths. However, with this particular project NOBSKA has been the most prolific at this scale. It took sixty days to complete and became an enjoyable build.

There are those today who remember this popular steamship and the sound of her whistle in and around Nantucket Sound. In operation, I never saw or heard her except for the sight at the USS Constitution Museum in Boston. 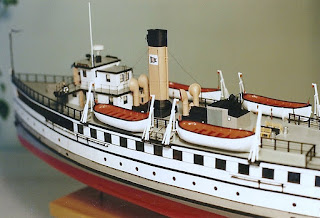 As a craftsman/ shipmodelbuilder, I'm honored to have the ability to produce these works for both collector and viewer. On Nantucket several have spoken to me about modeling her. On Martha's Vineyard several have shared data regarding her... And finally, to compliment the triple expansion steamship,  models of NOBSKA have found homes in various Cape Cod locations -including the  Massachusetts mainland and areas of New York State.

Five decades she ran in the Sound. She now sails on in history - and in the hearts of those who knew and rode her.